The Augusta Press Inc. is the 2022 winner of the Georgia Press Association’s Freedom of Information Award. 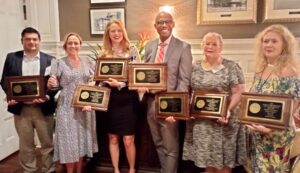 For several months, The Augusta Press requested to be notified of media releases from the Richmond County Sheriff’s Office. In spite of these requests, The Augusta Press continued not to be notified. Denying access infringes the exercise of First Amendment rights. In July 2021, local media were invited to join the Sheriff and Georgia Governor Brian Kemp for a media conference. The invitation was circulated to a number of Augusta media entities but not to The Augusta Press.

In November 2021, a media release was circulated concerning the arrest of a deputy. This media information was not sent to The Augusta Press, but it was sent to other TV, radio and print media in Richmond County and McDuffie County, Georgia, and in Aiken County, South Carolina.

The Chief Deputy responded that information was not being provided because the Sheriff does not like The Augusta Press’ opinion columnist, radio commentator Austin Rhodes. In an attempt to persuade the Sheriff’s Office to include The Augusta Press in media releases, etc., the Press’ counsel sent a letter to the Sheriff, members of his office, and forwarded a copy to his attorney on Nov. 15, 2021. No response to that letter has been received.

Judge: The Freedom of Information Award winner this year is the Augusta Press, which tirelessly pursued public records from a variety of city officials, and fought multiple legal battles over access this year. It’s truly heartening to see the commitment to open government by a startup news organization.

Background: The Georgia Press Association Freedom of Information Award may be given both to a daily and a weekly newspaper that did the most during the previous year to uphold the principles of the First Amendment and to protect the public’s right to know. Preliminary judging will be provided by the University of Georgia, Henry W. Grady College of Journalism and Mass Communication. Nominations may be made by the newspaper itself, by another newspaper or by the GPA Awards Committee. The nominations should consist of a written description of actions taken and results accomplished, with documentation as appropriate. This prestigious award will be presented during the Better Newspaper Contest Awards Banquet.

Bryan Davis has been named the new publisher and editor of The Fayette County News. Davis, a Mississippi native, is no stranger to the the newspaper industry.

Over a 15-year career, he has played the role of reporter, editor, and publisher at four different newspapers. He will write a weekly column for the Fayette County News, which can be found in both print and digital mediums. (5/22)

Scott J. Bryan, an award-winning journalist with more than 20 years of experience, has been appointed publisher and editor of the Tribune &Georgian. He started at the Camden County newspaper on April 18. Bryan previously worked as the editor at the News-leader in Fernandina Beach, Fla. He also served as editor of The Gadsden County Times in Quincy, Fla., Falatka (Fla.) Daily News and Hickory (N.C.) Daily Record and the associate editor of the Index-Journal in Greenwood SC.

In 2015, Bryan was named one of the “Top 25 Under 35” professionals by Editor and Publisher. He has won state press association awards in North Carolina, South Carolina and Florida for investigative reporting, enterprise reporting, feature writing, column writing, editorial writing, headline writing and page design. Bryan replaces Jill Helton, who resigned to pursue work outside of the newspaper industry. (5/22)

Brown is sports editor at Union-Recorder

Veteran reporter Matthew Brown has joined the Union-Recorder as sports editor. Brown has worked at several newspapers in Georgia including The Press-Sentinel in Jesup, the Americus Times-Recorder, The Houston Home Journal, The Moultrie Observer, The Times-Georgian in Carrollton and The Eatonton Messenger.

He has mainly covered sports, but he has also written news, features and personal columns. Brown has won four GPA awards for his sports columns.

“I am a sports reporter at heart. Though I have been through murder trials, interviewed political candidates and sat through BOE meetings,” brown said. “If there is a second passion in reporting, it would be the performing arts, community theatre.” (5/22)

Coming all the way from Youngstown, Ohio, Dominic Joseph is the new sports editor at The Griffin Daily News. As sports editor, Joseph is tasked with covering all local sports (including those in the surrounding counties) while staying informed and reporting on state sports.

He wants Griffin Daily News readers to know he prioritizes local sports and cares about them as much as the community does. Joseph is a two-time middle-school basketball champion, of which he said he is proud. He is a self-proclaimed Buckeye for life and thoroughly enjoys NASCAR. NBA great LeBron James is his favorite athlete. (5/22)

Wayne Knuckles has been named interim-editor and publisher at the White County News. Knuckles has an extensive newspaper background, having worked at publications in Kentucky, Tennessee, South Carolina, Florida and Georgia over the course of a career that has spanned more than four decades.

He was formerly editor and publisher of The Dahlonega Nugget.  Most recently, he served in the same capacity at The Clayton Tribune in Rabun County. Knuckles has won numerous individual awards for writing, photography and community service, while serving in a leadership role at numerous weekly and daily newspapers.