The Georgia Press Educational Foundation Inc. is a nonprofit, tax-exempt foundation established in 1963 to provide financial assistance to students studying journalism at colleges and universities in Georgia.

Since GPEF began granting scholarships to students in 1966, the foundation has awarded in excess of $600,000. Since 1994, GPEF has provided more than 150 Georgia newspapers with grants to hire a paid summer intern through the Billy Watson Internship Program.

Gabe Burns knew that he wanted to cover a Major League baseball team for its hometown newspaper.

How did GPEF help? In spring 2016, Gabe was awarded the William C. Rogers Scholarship for his senior year at Valdosta State University. That summer, he worked an internship at The Valdosta Daily Times that was partly funded through GPEF’s Billy Watson Internship Program.

Gabe took over the Atlanta Braves beat for The Atlanta Journal-Constitution a few months ago. He’s fulfilled the goal that he talked about when he interviewed with GPEF a couple years ago. 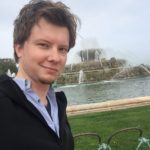 “The Georgia Press Educational Foundation afforded me further opportunities, both through scholarship and internship, that allowed me to better myself in the field. Journalism requires hands-on experience. You can’t grasp how meaningful the job is in the classroom. Real-work experience is a requirement, and thanks to GPEF, I had ideal circumstances to begin my career as a sports writer.

“Less than three years after declaring my journalism major, I am the Braves beat writer for The Atlanta Journal-Constitution. And I have GPEF largely to thank for putting me in the right direction.”

Gabe is just one example of dozens of students who benefitted from GPEF’s programs. Are you interested in a scholarship or an internship? Are you a Georgia newspaper interested in hosting a student with the help of an internship grant from GPEF? Click here to learn more about scholarship requirements, availability and applications and the Billy Watson Internship Program.

GPEF annually awards scholarships to Georgia residents attending Georgia colleges and universities who are pursuing a career in the field of journalism. Financial need, career plans, grades, interviews and recommendations of advisers, principals, teachers, counselors or Georgia Press Association members are all factors in the scholarship award process. Students may be awarded one of the honor scholarships or a GPEF scholarship. The scholarships are to be used for college tuition.

• Otis A. Brumby II Scholarship: This scholarship is awarded annually to a college junior or senior majoring in print journalism. Priority will be given to applicants from Cobb County. The Brumby Community Scholarship is named in honor of Otis A. Brumby, Jr., longtime publisher of the Marietta Daily Journal, Neighbor Newspapers and Cherokee Tribune. He is a past president of the Georgia Press Association and frequent winner of GPA and AP Freedom of Information Awards. He is also the first recipient of the David E. Hudson Open Government Award. Apply using GPEF scholarship form.

• Morris Scholarship: Established in 1987 by Charles Morris, Morris Newspaper Corp., Savannah, this scholarship is awarded annually to an outstanding print journalism student. Applications can be submitted through newspapers in the Morris Newspaper Corporation family and recipients are named by the GPEF Board of Trustees. Students may also apply using a GPEF scholarship form.

• William C. Rogers Scholarship: This scholarship was established in memory of William Curran Rogers Sr., who was editor and publisher of the Swainsboro Forest-Blade for more than 30 years. During his career, he served as president of Georgia Press Association, president of National Newspaper Association and president of National Newspaper Representatives. The William C. Rogers Scholarship granted by the Georgia Press Educational Foundation to students of the Grady College of Journalism and Mass Communication at the University of Georgia was established in his honor.

Could your newspaper use an internship grant next summer? Plan for it now. Recruit potential interns at your local college or high school and encourage students to check out the program. Return 2021 applications by March 1, 2021. Download application here: InternshipHostApp2019

Students interested in internships with a specific newspaper in 2019 should contact that newspaper to make sure that they are eligible for a grant as members of Georgia Press Association and that they are applying for an internship grant through GPEF. Grants are awarded to newspapers, and the newspapers are responsible for hiring interns. Student internship applications are circulated to all newspapers awarded grants. Download a student application here: StudentInternApp2019

GPEF Board of Trustees